El Dorado was the first unofficial expansion for BANG!, designed by BANG! fan Jidan over at www.bang.cz in 2006, and has been mentioned here and there since. In many ways, El Dorado was the spiritual ancestor to Wild West Show, conceiving of a way for players to alter the event cards in play. El Dorado also added a new role into BANG!, but not one that was permanently passed out with the rest at the beginning of the game. The “Grave Digger” was a role that could be adopted by the first player who died when it, as an event card, was in play.

An English translation of El Dorado was put together by Rangi in 2006, and the expansion used art from the western film, Lemonade Joe. IWhile it allowed English players to fiddle with El Dorado, much of the language was confusing, using terms such as “random distance” for instance. Some cards could not be understood, and others left huge holes in the gameplay. While Jidan answered a few of the questions English players had, many were not addressed, and he has long since abandoned updating El Dorado. However, before doing so he updated the Czech version with both new art and some new cards.

In an effort to make El Dorado more accessible to English speakers, I reinterpreted and rephrased the old El Dorado text. It should now be wasy to understand all the cards. Where there were conceptual holes in some of the event cards before, I have filled them in with my own interpretations and from what I have been able to garner from Jidan’s comments at www.bang.cz. I have also updated the English version with the updated art from Jidan’s czech version. Two examples of this are below: the old version is on the left, the revised version on the right. 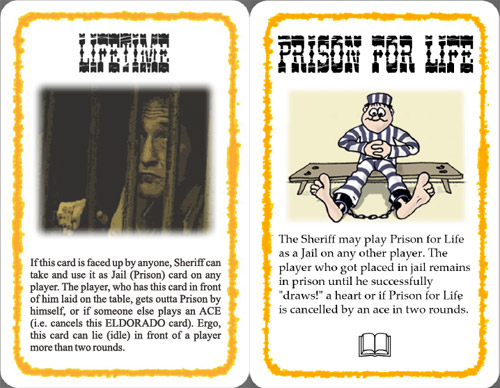 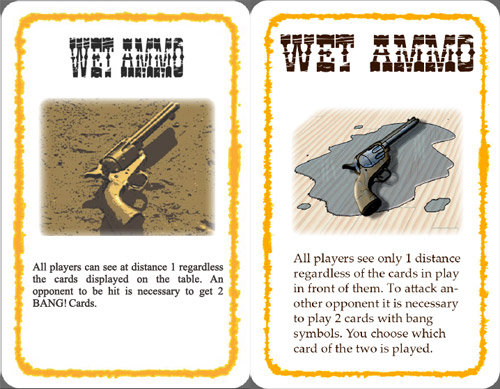 Besides this, I have also taken the liberty to change certain cards. I felt that certain cards, such as Desperados and Cavalry, unacceptably allowed for players to flip their role cards over. There have been gameplay problems with the "Grave Digger" role as well, which have been voiced online. I tried to address these problems in the re-release. I hope that you will enjoy this re-release and better English translation of El Dorado. If you enjoyed Wild West Show, A Fistful of Cards, or High Noon, I am sure that you will find that El Dorado is up your alley! It is also easier to produce--it doesn’t really matter if event cards are on any nice card stock or not.